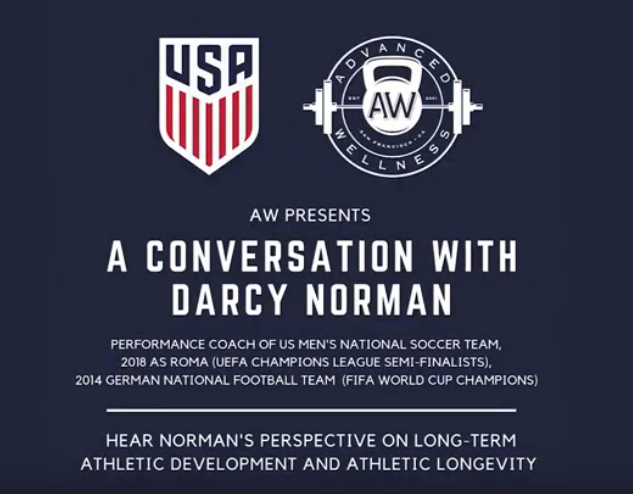 This May, the owners of Advanced Wellness hosted former professional athlete and Performance Coach for the U.S. Men’s National Soccer team, Darcy Norman at our training facility in Laurel Heights.

Darcy Norman brings 20 years of experience in the human performance industry. He is currently Director of Performance for the Irish based Data and Analytics company Kitman Labs, Performance Coach for the U.S. Men’s National Soccer Team and Director of Performance for Sugar Bowl Ski Academy. For the past 10 years, his work has primarily focused on creating and implementing methodologies, applied data and building strategic relations, as well as managing medical, rehab, fitness, nutrition, psychology and sport science staff at the highest level. Norman’s soccer-specific experience includes time as Performance Data Analyst and Fitness Rehab Coach with the German Men’s National Team from 2012-2018, helping Die Mannschaft to the 2014 FIFA World Cup title and third-place finish at Euro 2016. From 2015-2018, Norman also worked as the Director of Performance with Italian club AS Roma, helping the side to a semifinal appearance in 2017-18 UEFA Champions League. Prior to those positions, he worked as the Strength Coach and Rehab Specialist for Bayern Munich, helping the German club to the 2009-10 Bundesliga and DFB-Pokal Championship and the Final of that season’s UEFA Champions League. A licensed physical therapist, athletic trainer and strength and conditioning specialist, Norman also served as the Director of Performance Innovation at EXOS and as a Physical Therapist and Performance Coach at Athletes’ Performance.