The Physiology of the Healing Process: Blood Flow and Inflammation 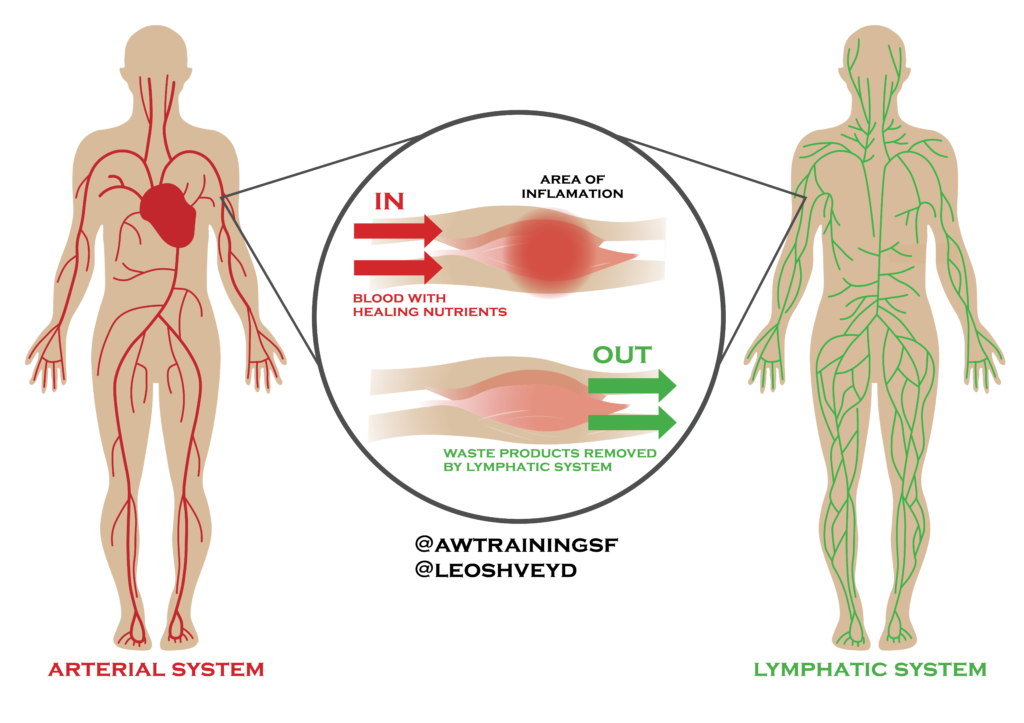 The Importance of Blood Flow in Healing

In the simplest terms, healing happens when increased blood flow circulates throughout the body (especially when directed to the injured tissue/area).  Blood brings healing nutrients to the site of injury and waste products are removed via the lymphatic system.  Unlike blood which is pumped through the body by contractions of the heart, the lymphatic system is activated by muscular contractions in the body.  Most commonly, muscles contract via movement.

The Role of Inflammation in Healing

The process of inflammation is the body‘s way of providing nutrients globally and specifically to an injury site. Inflammation is NOT an unintended mistake; it is, in fact, the first and critical step of the healing process.

Inflammation (i.e. or blood flow) is the body’s way of providing healing nutrients globally and specifically to an injured site. During the inflammatory process, as healing nutrients are delivered to the injured area, these are processed and produce waste. The waste produced should, in theory, be removed via the lymphatic system.    So inflammation is not only NOT a mistake, it is, in fact, critical to  the healing process.  It is the body’s way of initiating the healing process.  It has worked this way for millions of years, and the way it works in the animal kingdom.

The Role of Movement in Reducing Stagnant Inflammation

Long before R.I.C.E., humans inhabited the earth.  They moved EVERY day!  Some estimates indicate 10-12+ hours of movement per day.  Movement was (and in some parts of the world still is) required for survival.  Survival (e.g. safety & security, shelter, fire, water & food) was predicated on movement…A LOT of it, and in a variety of ways: crawling, walking, running, sprinting, climbing, swimming, carrying, throwing, etc.  If you needed water, “R”esting (on your couch) wasn’t an option.  If you sprained your ankle, you didn’t have the option of going to your freezer, grabbing some ice to apply.  So, what was done in lieu of the R.I.C.E protocols?  Humans continued to move; gingerly, gently, appropriately, purposefully.  They may have needed to crawl, limp, use a walking stick, etc. in order to completely or partially off-load stress from an injured area for a period of time.  Unlike today’s western world alternative of resting on the couch and icing, this is not an option when your survival depends on movement.  So move they did—they kept going!

And it turns out, movement is the number one anti-inflammatory available to humans.  In order to efficiently and thoroughly heal, blood must cycle (blood moving via the heart’s contractions and waste removal via the lymphatic system).  That is the goal of the “appropriate movement” approach to healing injuries…cycle your blood, by consciously focusing on pushing more waste products out via movement and/or muscle contractions!  And, at best, the application of ice is not advised in this approach because ice delays or (worst case) actually interferes with the body’s natural response to trauma.  It is far less effective than the body’s own natural response to injury, one that has been optimized over millennia.