“Get Ups”: Turkish, Skill of Strength, Czech, and Sit and Rise Fitness Techniques 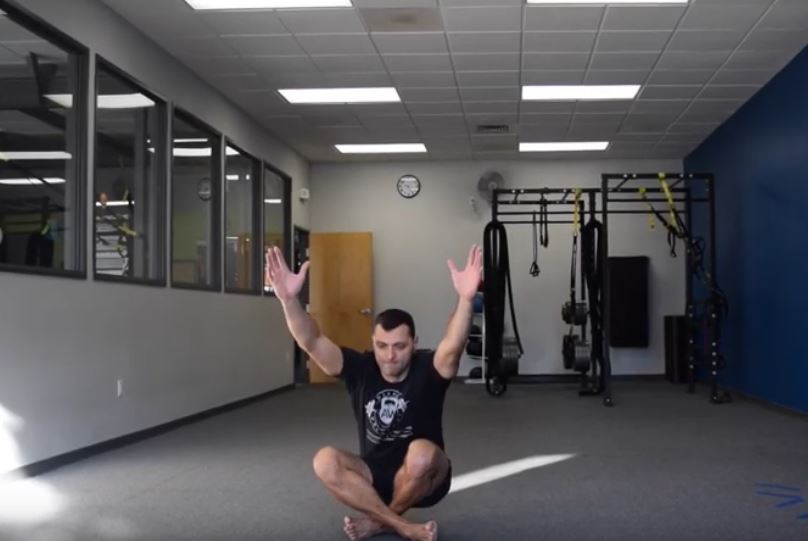 Getting up off the floor is fundamental to many aspects of life, from early-childhood development to building functional capacity which increases longevity in your later years, and everything in between in terms of health, fitness and athletic performance.

A 15-year Brazilian study, with over 2000 participants ages 51-80, investigated the mortality impact of the Sit and Rise Test (SRT).  The participants were instructed: “without worrying about the speed of movement, try to sit and then to rise from the floor, using the minimum support that you believe is needed.”  A maximum score of 10 was awarded if an individual could sit-up and stand without using supporting joints (knee, elbow, hand, etc.).  One point was deducted if, for example, the participant used her hand to sit and stand-up, and an additional point was deducted if a support was used to sit and lie-down.  The study concluded: “the inability to sit-and-rise from the floor was related to lower survival risk, irrespective of age, sex, BMI.  SRT scores of less than 8 (that is, requiring more than one support to sit and rise from, and lower to, the floor in a stable way) were associated with a two-to-five fold higher death rate over six years in men and women aged 51-80.”[1]   Moreover, “a low score on the simple functional assessment tool, SRT, was associated with a more than 6-fold higher all-cause mortality in men and women.”[2]

OK, seems powerful, right?  Why is the ability to get-up off the floor and return so important to mortality? And not only is this skill influential from a longevity perspective, I also believe it is associated with other aspects of  over-all health, quality of life and human performance. Getting up and down encompasses a wide array of traits such as body composition, muscle strength and power, flexibility/mobility, postural control, motor control/stability, balance and coordination.  In short, the better you are able to express these traits, the better you will score on the SRT and vice versa.

Interestingly enough, long before the Brazilian SRT study and present-day science, Get-Ups were known to be a valuable movement practice by various societies around the world.  For example, the Turkish Get-Up has been around for over 300 hundred years, with its roots in wrestling and training.  Impactful movements that have stood the test of time, that are further supported with new-era science, are worthy candidates for consideration and inclusion in a training program.

Here is a demonstration of the “Sit and Rise Test”:

A Variety of “Get Up” Options

So, if getting up off the floor has the potential to help humans be BETTER in so many respects, perhaps adding variety (i.e. any and all “Get-Up” variations) need to be considered since we know that adding resistance to a simple movement can pay great dividends.  Understanding the variances, as well why some are more impactful for certain traits versus others can result in a greater likelihood of achieving the desired training results.

To that end, let’s look at some different variations. There are many variations of the “Get Up” technique including (but not limited to) Turkish, Skill of Strength (SOS), Czech (aka, Developmental), No-handed.

Below is a graphic showing the steps and positions of various Get-Ups.  As you will notice, they have many similarities.  However, get-ups vary in two major ways: movement patterns and positioning.

Movement pattern is a broad term to describe various movement intricacies.  For example, some describe movement patterns as “push, pull, knee hinge, hip hinge, carry and rotate”; they are also differentiated based on fascial lines: sagittal (forward and back), frontal (side-to-side) and transverse (rotational).  However, for purposes of this post, we will consider whether the movement pattern is ipsi-lateral (occurring on the same side of the body i.e. upper and lower portions rotate while the body stays in place) or contra-lateral (occurring on the opposite side of the body i.e. upper versus lower while the body moves).

How To Execute a “Get Up”–Fitness-Building Techniques

Based on the desired fitness goal or fitness level of a trainee, one type of Get-Up may be preferred over others.  Certain variations require more mobility (control of a greater range of motion).  For example, dropping your elbow to the ground in step 5 of the Turkish or Czech Get-Up requires greater hip and thoracic spine mobility than supporting yourself on the hand.  In my experience, the progression of loading continuum starts (least to most amount of load): Czech to Skill of Strength (SOS) to Turkish.  In the Czech Get-Up, the ipsilateral roll of the first position is the biggest limiting factor. In the SOS Get-Up, the limiter is the transition from Position 5 (tri-druped) to 6 (tall kneel).  Moreover, the Czech Get-Up requires greater stabilization (motor control) due to its smaller base of support (surface area of body in contact with the ground and/or number of limbs touching the ground) in the first position due to the ipsilateral nature of the movement pattern.  In addition, certain Get Up variations will preference activation of certain muscles over others.  For example, the transition from position 1 to 2 of the Turkish get-up will recruit more latissimus and tri-ceps, while transition from position 1 to 2 of the Czech get-up will activate more rotator cuff and rhomboid. The No-Hand Get-Up requires greater core and leg strength.

The info-graphic above categorizes most of the frames as ipsilateral (black frame) or contralateral (orange frame).  Also, the broken line of C2 and B7 signify unique positions (especially when compared to the other get-ups of the similar progression level).  For example, B7 of the SOS get-up is a variation where the kettlebell is in the opposite hand of the stepping forward foot.  These important distinctions provide variety in training.

Choosing the Right “Get Up” Approach for You

As a coach/trainer, in order to select the right Get-Up version, you have to be able to answer two questions: “Who is it for?” and “What is for?”  When you first consider the level of the trainee and their specific needs (mobility, stability, strength, etc.), you are better able to prescribe the movement that can best help your client.  Truth be told, at Advanced Wellness we only train full Turkish Get-Ups, however we have sometimes used portions of the Czech (Position 1-2+) and SOS (top down, in reverse, position 7 to 4) Get-Ups to elicit a varied training effect.

That being said, Get-Ups have limitations especially for those that are experienced or proficient in a specific trait.  For those individuals, completing Get-Ups will not make you elite in any one skill (mobility, stability, strength, etc.).  However, in today’s world, breadth of movement is important, as is having a foundation in order to train with a goal of achieving elite level skills.

As with any movement, the right Get-Up selection, for the right person, for the right task/skill development, with the right progressions, will elicits great results.  It also may help you live longer, with better quality of life, be more fit, stronger and perform better.

Below please find videos of the Turkish, Skill of Strength, Czech and No Handed Get-ups.

Skill of Strength “Get Up”

Czech (Developmental) “Get Up”

No Handed “Get Up”

Now Get-Up and be BETTER!